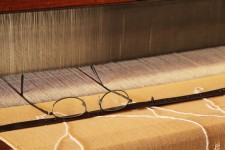 No one on the bus wanted to sit next to me. I cannot say that I blamed them, for I was a mess of torn skin, a torn soul, and torn fabric. I was running from a bad situation, one in which I was promised that I would suffer the same assault to my body every day until I learn to “behave.” I was not willing to remain in a broken relationship, in which the person seemed to derive much pleasure and a sense of his masculinity in breaking my body, mind, and spirit.

It was a Saturday night, and on the advice of many well-meaning friends and fellow Christians, I had returned to salvage a marriage that should have never happened. In my spirit, I sensed someone telling me not to go out to the club with my then-husband to celebrate my return. But, I had not learned to discern the Lord’s warning voice. I did feel as though something bad was going to happen, so I reminded myself to remain sober and alert.

But, I failed to do either, drinking with abandon. When I remembered that I was to stay alert for trouble, I went outside to get some air, hoping that the cold, crisp early morning air would help me sober up fast. As I stood on the sidewalk in front of the VFW club with probably 50 or 60 people around me, he struck me from behind, a coward’s way. Highly inebriated, I could not defend myself, and I know now that was the way he wanted it.

As my head kept making contact with the side of the brick building, I hoped that someone would come to my assistance, but no one wanted to get involved, many believing it to be a private matter between husband and wife and others simply wanting to be entertained. I do not know how many times I was hit, I lost count. Then, the situation became potentially fatal.

He grabbed me around the neck, tearing the fabric of my dress, squeezing with all his might. As my feet left the ground, I knew that I was about to lose my life, and I was not ready to meet my Creator. It is ironic that up until the moment that I thought that I was going to die, I did not think that I had anything worth living for, especially because I had given up so much joy and peace to return to do my “duty” and be a submissive Christian wife.

But, as I felt my spirit leave my body and begin falling into a black hole, I started to call out to God to save me, for I knew that none of the people standing around us could save me. I needed a power greater than any human possesses to keep me in the land of the living. I prayed that God would not let me die like a dog in the street. Sometimes we wait a long time for God to answer, but that night, He answered immediately, which told me that his promise to Joshua to be with him wherever he went (Joshua 1:9) was true for me as well.

My eyes opened and I told him to go ahead and kill me. I think that hearing me speak made him realize that he was about to commit murder in front of lots of people, so he released me. But, as we were driven home by his cousin, he told me that he planned to beat me every day until I learned to “respect” him. That was not going to happen under the circumstances, and why abusers cannot figure that out is beyond me.

Finally at home again, I did not take time to bathe or change clothes. I grabbed my suitcase, his last $20, and got the heck out of Dodge. A cab ride later, I was on a Greyhound bus back to the life I had left behind, one without violence and constant criticism. As I took my seat, people were staring at me, for my pink dress was torn, with dried blood from the neckline to the hem, my eyes were nearly fully closed, and my neck looked at if a bear had swiped me with its paws.

It is a lot easier to take needle and thread and mend the torn edges of a dress than it is to mend a soul that has been tattered and torn. It takes the grace and mercy of God to truly come to see oneself as worth the effort. One has to become a new creature, completely different from the old woman who, after a childhood of rejection and abandonment, has come to doubt her value and worth to the world and to herself.

Matthew 9:16 (The Passion Translation) states, “And who would mend worn-out clothing with new fabric? When the new cloth shrinks it will rip, making the hole worse than before.” To mend a broken life and soul, you must start with new ways of thinking and believing, including a transformation in the way one sees themselves and their value and worth to the world, be it their family or the complete strangers that they will meet as they live their everyday lives.

For me, it meant learning to see that I was more than I had been told that I was, as I had become a child of God, a sheep of His pasture, and the very apple of His eye (Zechariah 2:8). I realized that I was one of a kind, for God does not make duplicate people. To be one of a kind makes us priceless, valuable beyond measure. With unique talents and gifts, each person is needed for the fabric of life to sustain us all.

It took time and focused effort and energy to get to a place in which I felt whole and healthy, physically, mentally, and spiritually. And my journey now is to help mend other women who have had their souls and their faith shredded and torn through the insensitivity, violence, and indifference of others. Through my stories of redemption, renewal, and restoration, I hope that other women will come to see that they are jewels of great value and worth.

We have to let go of the negative messages that emphasize our value as women as only being on a physical plane, for we are so much more than our bodies. We have minds, abilities, talents, intelligence, love, joy, peace, and all the fruit of the Holy Spirit to offer to the world, which makes us absolutely irreplaceable. Let’s start by teaching our daughters early that they are valuable and of worth, so that we can minimize the numbers of torn and tattered people in need of the mending of the fabric of their very souls.

3 thoughts on “Mending the Torn Fabric of a Soul”