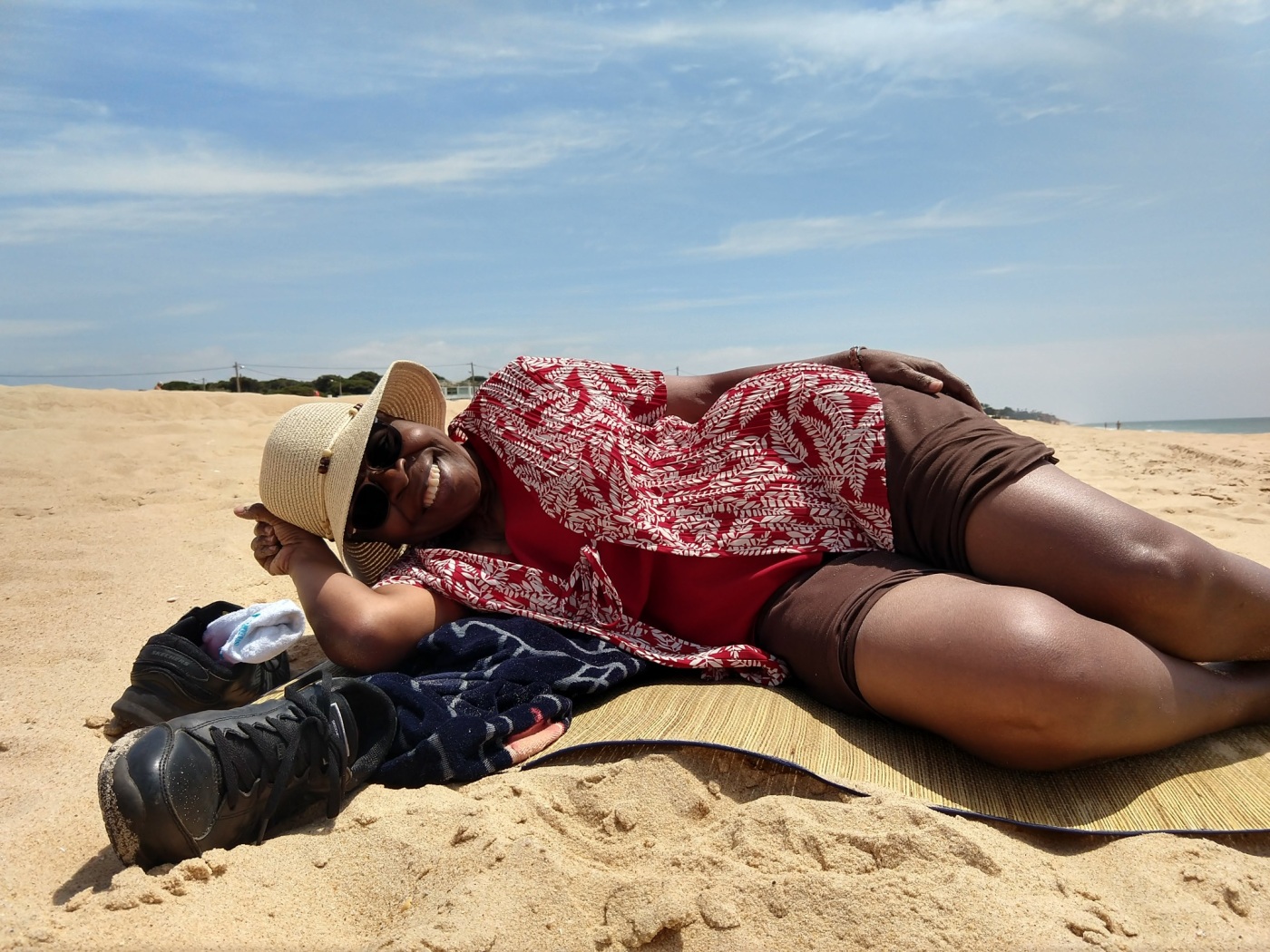 I have always been fascinated by whites and tanning. Being blessed with naturally brown skin, and the discrimination that accompanies it, I always have marveled that anyone would want brown skin. So, as we laid on the beach in Portugal, I kept an eye on the people nearby tanning for hours in the pursuit of the perfect tan. I worried when I realized that people were asleep with the sun relentless beaming down on unprotected skin.

As I thought about how sore they would be later in the day, I wanted to go over and say to them, “Maybe it’s time to cover up before you start to burn and blister!” But, of course, I did not do anything of the sort. True enough when I saw them later at a restaurant, with their dappled skin, white in places and more red than brown in others, I could see the grimaces of pain with each lift of the fork to the mouth, and my heart went out to them.

But there was one white guy a lot older than us (and we are in our sixties) who appeared to be the resident Casanova, fully tanned but still laying in the sun for more. Admittedly, his somewhat wrinkled tanned skin did not seem to lessen his appeal to the more mature women roaming the beach, especially those traveling alone from less sunny locales.

As they sat next to Mr. Adonis, as I called him, the contrast between their still-white skin and his perennialy tanned skin was so dramatic that I often caught myself staring and thinking that the women had a long way to go to catch up to that guy. Day after day, he roamed the beach with just shorts on, exposing his upper body to relentless sunshine and was unashamed to parade up and down the beach, receiving and acknowledging his just admiration.

It made me aware of the benefits of the pursuit of the perfect tanned skin in making love connections. But, also I realized that there are other social benefits to tanned skin for vacationing people, for it relayed to others in their hometowns and workplaces that they had enough money to get away and lay on the beach with absolutely nothing to do but tan. It is a form of status symbol to have tanned skin, which is a way of gaining prestige and social standing. So, I now better understand why some people go to such lengths, even risking skin cancer, for brown skin.

We are here on earth for a short time, and we work hard to present the very best of ourselves to others, whether it is to connect for a potential lifelong relationship or to prevent unflattering thoughts regarding our social standing in the world.  Yet, as a nearly ten-year cancer survivor, I would counsel people in pursuit of the perfect tan to be careful of the price in terms of cancer of the relentless work to impress others.

Weigh the costs and the benefits of every action and decision, and remember what King Solomon wrote in Ecclesiastes 2: 22-23, “So what do people get in this life for all their work and anxiety? Their days of labor are filled with pain and grief; even at night, their minds cannot rest. It is all meaningless [or vanity].” In the end, the costs just may be much greater than the benefits for undappled, perfectly tanned skin. Just a little insight from me to the world. See you tomorrow for Psalm Wednesday.

2 thoughts on “The Pursuit of the Perfect Tan”