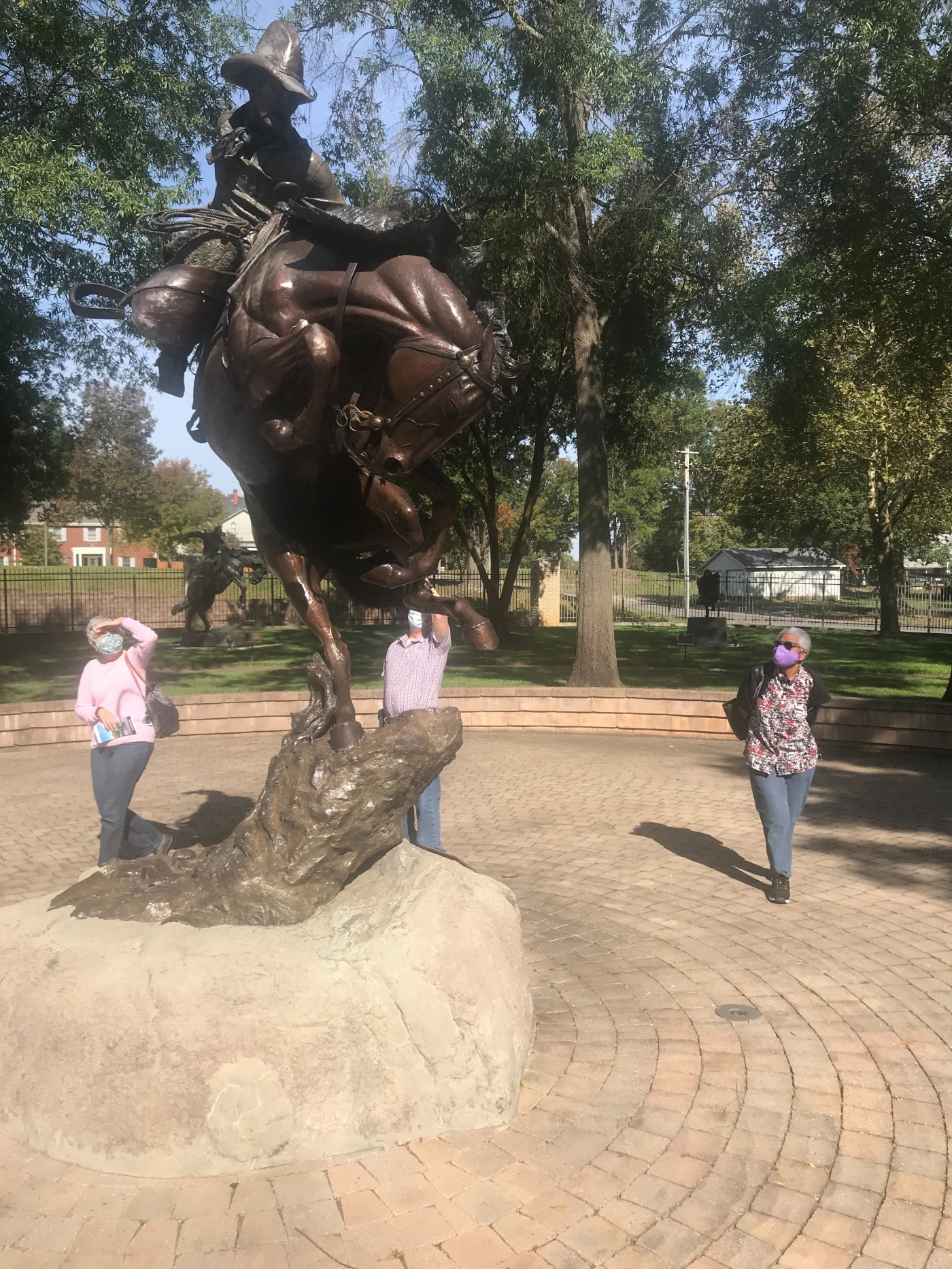 Before COVID-19 arrived, I loved visiting museums. I can stay in one for hours on hours. I am not too keen on much modern and abstract art, but I love paintings, sculptures, and artifacts from the past. So, upon learning of a museum near us, we decided to check it out, although you could never have told me that I would spend three hours looking at Western artifacts!

We were simply looking for ways to recapture some of the activities we loved before the coronavirus. The visit was just what I needed to burst my frustration bubble at the slowness of the vote count and months of being cooped up at home.

It is the Booth Museum of Western Art in Cartersville, Georgia, the most unlikely place for a museum about the Wild West. It has 120,000 square feet over all, so it is big! Whereas I thought it would only have paintings and sculptures of cowboys, relating the story strictly from a European perspective, there was a diversity of items, including a prolific number of paintings and sculptures of Native Americans and even Black cowboys (Wowee!).

So, we spent the time reading nearly every plaque about the sculptures and painting from the West, as Douglas is originally from California. We lost count of the numbers of items, but it is a lot to keep someone interested and entertained for three or more hours.

There were no lines on a Thursday morning, and we had to wait for the gates to open, required to wear masks, which we planned to do any way. Only 10 people at a time could be admitted. We spent 45 minutes with four other people on a docent-guided tour of the sculptures on the grounds. Interestingly, but not surprising, all of the docents are males.

There was a sculpture that caught my eye and my soul. It was of a captured Native American male, complete with his hands tied behind his back. It was a huge sculpture, but it brought me so much sadness to remember the horrors experienced by Native Americans whose cultures were communal. For them, land and trees and rivers belonged to everyone. They fought to preserve it, but arrows will never defeat bullets. Museums are meant to touch our emotions through the art.

I also loved the paintings and scupltures of women. I was glad that their stories, both of European women and Native American women, were included. Oh, the secrets of surviving that these women could divulge to us today!

One of the most interesting exhibits was a complete stagecoach. I kidded Douglas that we would have taken one of them if we had lived then and had the wanderlust we have today. But the inside looked quite small. I wouldn’t want more than four people in there at any one time. I didn’t realize how much I would love western history and artifacts.

There was also a gallery that had pictures and memorabilia all of the presidents of the United States, including Donald Trump, as well as spaces for the 46th president and fiture ones. I admit that neither of us wanted to look at this exhibit. It is the last exhibit, and when you are bone-tired, thinking of some of the men who have served as president doesn’t raise your spirits. I’ll go and check it out when they add a woman.

Another exhibit gallery that I didn’t visit was one on the Civil War, because it causes me pain to think of an effort to retain the brutality of slavery, but also I didn’t think the subject should be in a museum dedicated to the West. However, I guess being located in the heart of the South, there is some interest in the South rising again, but I don’t share it.

We were told that the museum was one of only two museums with Western art that are in the Eastern Unite States, the other being somewhere in New York. So, if you live outside the West and like these types of exhibits, visit Cartersville, a little town in Georgia that is about an hour outside of Atlanta and is very pretty and the people are friendly. We plan to go back, as they change the exhibits every two to three months.

It was just great to get out of the house and do something I loved, after months of inactivity. You just don’t know how much good that does for your soul!

Fandango prompt is Prolific. Ragtag prompt is Diversity. Word of the Day Challenge is Count. Your Daily Prompt is Divulge. The Daily Spur is Line.