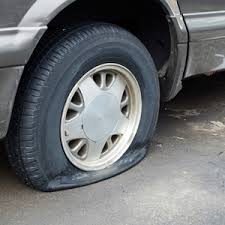 He noted the situation had become chucklesome. The police officer tried not to laugh, but watching the lady try to prove that she didn’t need rescuing and could change the tire just as good as he could was hilarious.

As she attempted to unscrew the lug nuts to take the flat tire off, her head went up and down like a bobble doll, and she was breathing hard. He knew that she would never accomplish the task, but he didn’t interfere. He knew the right moment would strike and she would realize that if she were going to get out of the rain any time soon, she needed to accept his assistance.

He made sure she was safely away from the traffic that zoomed by, and he really did admire her tenacity and determination. He couldn’t help but agree with her when she had said, “I have to learn how to do this, because what if I were on a highway and no police were available?”

He told her that he understood her desire, and that he had taught his daughter and son how to change a tire, just for emergencies like this. But, he wasn’t going to leave her there until the tire was changed.

He was so engrossed in his thoughts that when she howled and let go a string of curse words, he nearly jumped out of his skin. She asked his forgiveness, not wanting to be arrested for cursing at a police officer. Humbly, she admitted that she wasn’t mechanically inclined, not knowing a pinion if it bit her.

He very graciously changed the tire in about 20 minutes. She thanked him for his kindness and for being so patient with her. But, it was her last words that stayed with him the rest of the night. She said, ” As a black woman, I was afraid when I saw you stop with your lights on, and I just wanted to tell you that everything was fine! I am sorry that I misjudged you! Be safe, Officer!”

He stood there staring after her as she drove away!

Fictional story written for the Sunday Writing Prompt for August 9, 2020: Choosing the Context, with the prompt: He noted the situation had become grim/concerning/chucklesome. Ragtag prompt is Bobble. The Daily Spur prompt is Strike. Your Daily Prompt is Pinion.