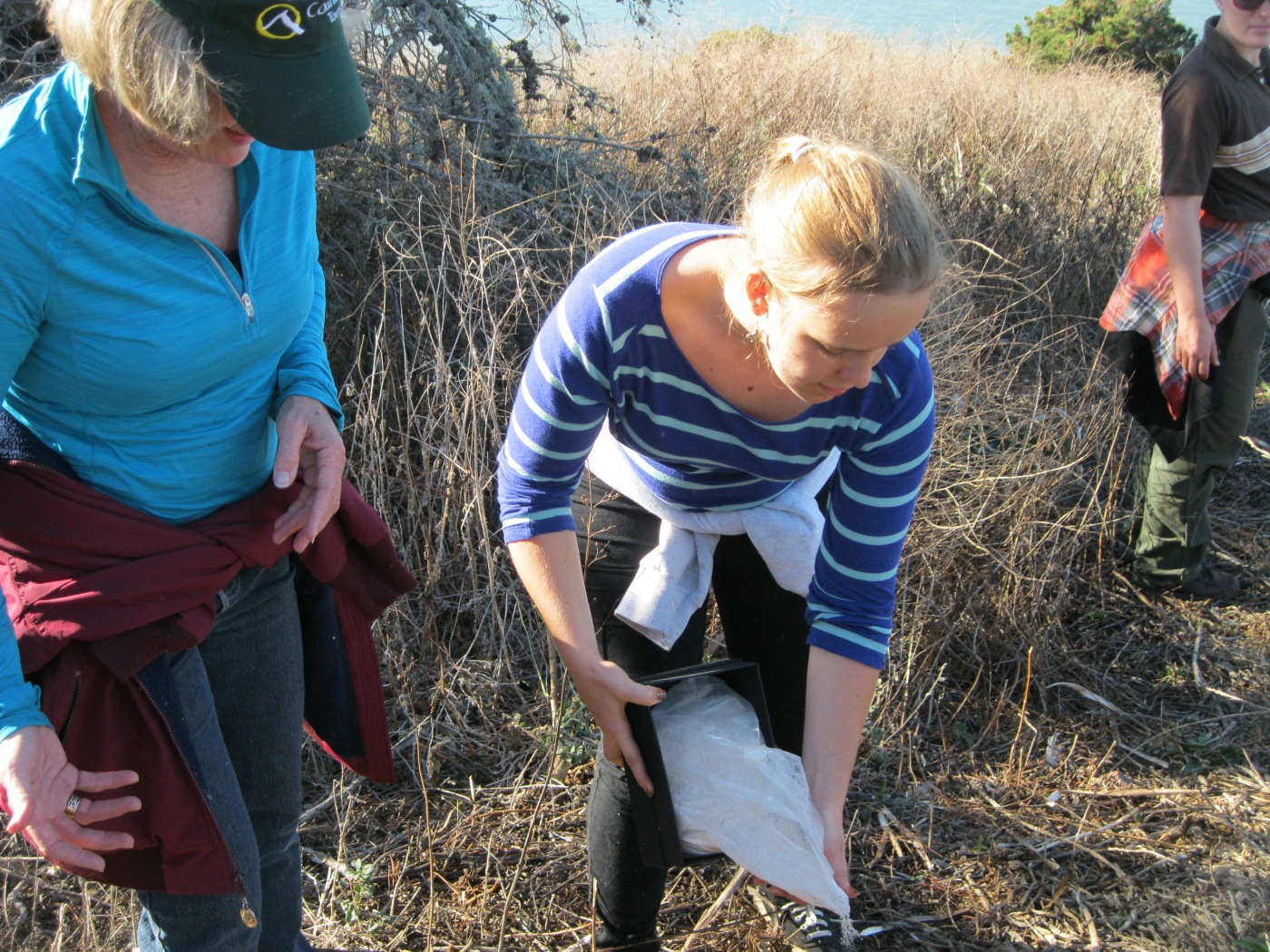 We stood on the beach of the island and wondered how we were going to get to the top. One brother chose a route that started easy but became almost impossible. Another brother went up the steady slope. I followed my sister’s fiancee and my sister followed me up a very steep slope to half way to the top, but avoided the poison oak. There sat my daughter, bruised from a fall but game to go farther. Finally, we arrived at the top and the tree where my father had scattered the ashes of his mother and his aunt.

My father had taken great joy in telling people that he wanted to be surrounded by naked ladies when he died. Unbeknownst to them, years before, he had planted a ring of bulb flowers. We even saw a ring of pink on the island when looking at it from Google Earth. These flowers are known as Naked Ladies. Each of us took turns scattering my father’s ashes around the ring of bulbs. As you can see in the picture, they were not flowering then.  Later, despite washing carefully, all my siblings came down with horrible cases of poison oak. I am thinking of this because my mom, who is 92 and ailing startled me back then by saying, “Don’t worry about poison oak when I die. The bay and the island were your father’s happy place. I go to the High Sierras for my place of peace and contentment. Scatter my ashes there.  Of course, by the time she dies, we may be so old that we come down with pulmonary edema scattering her ashes.  Actually, we will celebrate her life as we celebrated Dad’s, willing to catch poison oak or anything else to honor them.

Why did I expect my parents who were married over 70 years and loved each other deeply to want to be buried together? It is like we think that buried together means together in heaven. This is when Jesus was asked “Who’s wife will she be?” and answered, none, it’s not like that. Would I insist that my Dad’s wishes dominate and bury her on the island? Why wouldn’t we bury both together in the High Sierras, making my mom’s wishes dominate? Why do we bury together?

This lead me to ponder more. Why do we bury in graveyards? We had visited the graves of ancestors in New England. My descendants, looking for my parents graves would not find them. Should we have insisted on a burial with headstones? It almost seems like a human effort to live on, as a substitute for God’s eternal life. Then I thought about other attitudes about cemeteries. Recently, my wife and I couldn’t be buried together. Farther back in history, Catholics declared that they had the only sanctified graveyards. If you weren’t buried there, you couldn’t go to heaven. If you were, you were protected from becoming a zombie or vampire or whatever the local traditions feared. As a result, each group, protestant, jew, etc. had their own burial plots. In fact, cremation was forbidden, as if God couldn’t find you body to raise you from the dead.

It is funny how this fear of death controls us. In the Bible Paul says that I am torn, to die is to be in a better place but to stay alive is better for you. I have seen a pastor destroyed because his wife had cancer. They believed absolutely that God would heal her. When she died, he left the ministry. Do I have the faith to be at peace if I found out tomorrow that I have terminal cancer? As a Christian, I should be at peace trusting God either way. I am learning to trust Him more, but there is more growing to do.